St. Paul Center for Biblical Theology is offering a FREE video Bible Study this coming Lent 2019 titled: Genesis to Jesus!
This program usually is not offered free, and it originates from St. Paul University Steubenville with Dr. Scott Hahn and multiple theologians. This study presents the whole sweep of salvation history, and helps you make sense of the Bible, literally.

If you have internet, you may register by contacting mail@stpaulcenter.com and have it streamed into your homes.

We will also be studying and discussing Genesis to Jesus during our Saturday morning bible study beginning on March 2 at 10:30am in the Holy Family Community Center. This will be led by Fr. Barr and Joanie Williams. Please feel free to join us as we journey through Lent together. 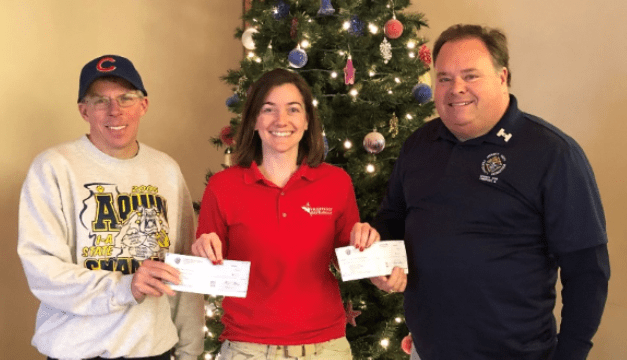 Freeport Knights of Columbus got together on December 12 for their annual Potluck Christmas dinner. The KC’s distributed checks from the Tootsie Roll drive in September to Freeport Special Olympics, represented by Anne Schulz, Freeport Park District; Malcom Eaton, Brian Babcock, Marketing; and Presence St. Vincent, Diane Cushman. Fun was had by all and we are looking forward to next year’s fundraiser. Nils Sandstrom and Todd McKenna represented the Knights of Columbus.

“Combatting the culture of abuse, the loss of credibility, the resulting bewilderment and confusion, and the discrediting of our mission urgently demands of us a renewed and decisive approach to resolving conflicts,” according to Pope Francis.
His remarks came in a 3600-word letter to the US bishops, who are meeting for a spiritual retreat January 2-8, 2019. The letter, Dated January 1, 2019, was released by the Vatican on January 3.
Preacher to the Papal Household, Capuchin Friar Father Raniero Cantalamessa, O.F.M. Cap., is directing the retreat under the theme of “He appointed Twelve, to be with Him and to Send Out to Preach” based on Mark 3:14. The retreat is taking place at the invitation of Pope Francis who has asked all bishops in the United States to pause in prayer as the Church seeks to respond to the signs of the times.

Chapter eleven challenges both Jews and Gentiles. God will graft into His fold whomever He chooses, according to the faith they live. Neither should be “haughty” (v20) over the other because they have been chosen by God. They can lose it on account of losing their faith. We too should be careful about being prideful of our faith. Sometimes we can think ourselves better than the other and assume our salvation. END_OF_DOCUMENT_TOKEN_TO_BE_REPLACED

Father Thomas Berg is a priest of the Archdiocese of New York, a former Legionary of Christ and professor of moral theology, vice rector and director of admissions at St. Joseph’s Seminary in Dunwoodie, New York. He is author of Hurting in the Church: A Way Forward for Wounded Catholics. He spoke recently with CNA’s Courtney Grogan about the challenges Catholics face amid the Church’s sexual abuse and misconduct scandals. The interview is below, edited for clarity and length. …

We have a long way to go yet. Weeding out the evil takes a lot of work.

The much-anticipated grand jury report on clerical abuse in six Pennsylvania dioceses was released August 14, 2018.
The document – more than 1,350 pages long – cites credible accusations of abuse against more than 300 priests, with more than 1,000 victims involved. The study took two years and was overseen by Pennsylvania Attorney General Josh Shapiro.
“The cover-up was sophisticated. And all the while, shockingly, church leadership kept records of the abuse and the cover-up. These documents, from the dioceses’ own ‘Secret Archives,’ formed the backbone of this investigation,” he said at a news conference in Harrisburg, according to Associated Press.
“Most of the victims were…

PORTLAND, Ore. — The feast of Corpus Christi June 3 marked a special event in the Archdiocese of Portland, Oregon, with the release of the new “Archdiocesan Liturgical Handbook.”
The 375-page handbook, which was disseminated in print to all 120 parishes and chapels of the archdiocese, deals with all things liturgical, outlining the proper celebration of the Eucharist, from what the priest does to how the congregation is to participate.
In his introduction, Archbishop Alexander Sample explained the handbook is intended as a guide to many aspects of life in the archdiocese and parishes “that concern the celebration of the Sacred Liturgy and the understanding of the faith it expresses.” …

When I recently read about the new assault within the Church on Pope Blessed Paul VI’s 1968 encyclical on contraception, I was deeply disturbed. Humanae Vitae told the truth about contraception and all its negative impacts on people and society. It was precisely because we read Humanae Vitae that my wife, Margaret, I and became “reverts” to the Catholic Church after being away for almost 20 years. Margaret and I were bot…

The year 1968 remains a watershed moment in an era of revolution and upheaval.

With the world engulfed in social, political and especially sexual upheaval, the year witnessed the brutal rejection of a relatively brief papal document that sought to clarify the Church’s teachings on family life and the regulation of births. Humanae Vitae (The Regulation of Birth) remains one of the most polarizing papal encyclicals of all time, but also one of the most prophetic in foreseeing vividly the immense dangers of a contraceptive culture that ultimately came to pass.