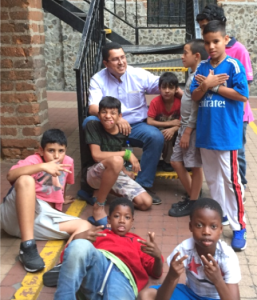 Fr. Marco César Riveros, of Salesian Missions, will be visiting and celebrating Masses at St Joseph and St Mary Church next weekend. Fr. Marcos was born in 1973 in Cúcuta, Colombia. He made his first vows in 1992, and after ordination in 2003 he served as the youth minister at the Colegio San Medardo, Neiva, Colombia. While there he organized retreats for the students, and organized the religion curriculum for the school. In 2006 he became the provincial delegate for youth ministry for the Bogota province. Later he was made the provincial delegate for Vocation ministry and for the Salesian Family.

Fr. Marco has served as the pastor, director of the Salesian parish in Contratación, and assumed the responsibilities as rector of the Salesian school there as well. After a visit to the United States in summer of 2016, he worked in the ministry to street children in Medellín.
Fr. Marco is presently assigned to St. John Bosco Parish in Chicago. He oversees the parish social outreach, Caridades de Cristo Resucitado, which feeds and clothes homeless people in the city, and serves families in need of food assistance. He teaches catechist training classes, as well as serving the sacramental needs of the parishioners.