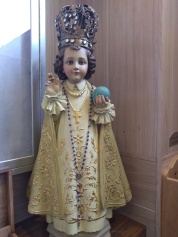 Another image we have of Jesus in the foyer area is the Infant of Prague. I do not know when this image was brought here to St Joseph Church, but it has been here for quite a while. There is no specific information as to when the original statue of the Infant of Prague was made. In Spain, around the 1300s, there were similar images made with a wood base carved, covered in wax. It came on the radar for devotion, as it was said St Theresa of Avila had it for a while. There were political connections between Spain and Germany that were fostered, and along with it, devotion to the child Jesus. That would explain the devotion in the German Tradition. It went through wars and mishandling in the 1600s and ended up in Prague. Many miracles have been attributed to the original image in Prague. The original looks more like a doll than a statue because of the wax, but is not something to play with as it is very fragile.

There are novenas for this image and chaplets. One tradition is to dress Jesus according to the liturgical seasons: purple, green, red, white or gold. In the image we have, Jesus is already dressed in a fine gold vestment, so dressing Jesus in not necessary. Many people who have had the Infant of Prague swear to the blessings they have received by this devotion. Here is the one I have in my office. Many people have it in their homes by the front door to welcome whoever may enter. Notice the child Jesus again has his hand up as if to give a blessing. So the idea is that anybody who enters their home would receive a blessing. It makes me wonder if I go in and out of the home, does that mean I receive a blessing as many times as I enter that door? If we have this image at the entrance of our door, how many people are receiving a blessing when they come to Mass? As you enter and leave the Church, it might not be a bad idea to ask Jesus for His blessings.
Another image we have in the foyer area is the Statue of St Ann with the child Mary. It is above the door to the right when you 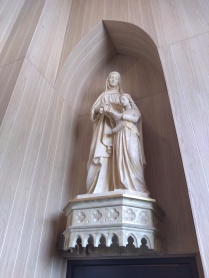 enter the building. Family is so important in all our lives. Mothers are important and so are grandmothers. St Ann is the grandmother of Jesus, and as such is the patron saint of grandmothers. Today’s culture tries to mitigate the importance of grandparents. We look at people for their usefulness, and are willing to discard what we deem not useful. St Ann and our Blessed Mother are there to remind us that nothing can replace family. Without our mothers or fathers, we would never have been born. That deserves respect. So it is with Mary. Without the mother of Jesus, Jesus would never have been born.
Think about it – if you had a different parent, either father or mother, you would never had been born. Not such a scary thought if you know that the reason you exist is because God wanted you to exist. The Father in heaven wanted Jesus to come to us. Mary was the one to do this. I hope we all can stop and appreciate the families we all have as God’s gift to us, for better or for worse. I know we can all be grateful for the heavenly family Jesus has given us. But do we spend enough time with them?

We are two Catholic Churches close to downtown Freeport, IL. Our communities are over 150 years old and have been dedicated to our lord Jesus Christ since our inception. We believe in God the Father almighty, creator of heaven and earth, and in Jesus Christ, His only Son, our Lord, who was concieved by the Holy Spirit, born of ythe Virgin Mary, suffered under Pontius Pilot, was crucified, died and was buried; he descended into hell; on the third day he rose again from the dead; he ascended into heaven, and is seated at the right hand of God the father almighty; from there he will come to judge the living and the dead. I believe in the Holy Spirit, the holy catholic church, the communion of saints, the forgiveness of sins, the resurrection of the body, and life everlasting. Amen.